On Air Now: The Overnight, Hosted by Gary Monte 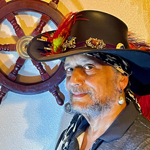 Steve Morrow was sound designer for The Langston Hughes Players from 1978 to 1980, and a major member of the local band, Demigod, from 1991 to 2010, recorded on the double CD called Breed of Men. His alter ego is "Lord Mariner" the pyrate. Performing music as this character and attending Renaissance Faires, Art Fairs and nautical-themed shows and towns in character, he spreads goodwill everywhere he goes.