On Air Now: The Morning Show, Hosted by Gary Monte 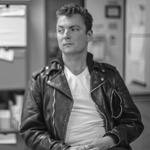 Kritian Day is the host of the weekly IOWA BASEMENT TAPES, a show featuring Iowa musical artists every Thursday night from 9-10 p.m.

Kristian Day is a filmmaker based in the midwest. He was raised by working class parents and grew up watching Japanese monster movies.

His career began in 2007 when he began doing sound design and composing music for independent films. His inspiration came from the musique concrète styles of John Cage and David Tudor. Many of his early short films were inspired by the same philosophies as his musical heroes.

He worked on many reality television and docustyle projects including The Bachelor, Intervention, Murder Among Friends and others.

Now in 2018, he has produced projects for Funny Or Die, Crypt TV, PBS, NHK, ITV, and many others.